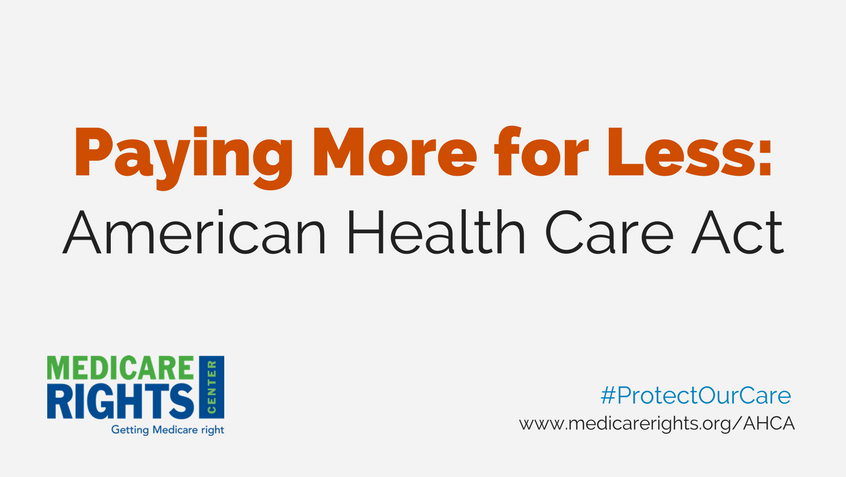 Senate leaders are reportedly rushing forward to vote on their health plan, and reports indicate that the plan will be essentially the same as the American Health Care Act (AHCA)–the destructive bill passed by a narrow margin in the House of Representatives last month. Since Senate leaders are keeping their backroom dealings out of the public’s view, we can only assume that their bill will have the same impact as the AHCA. Our new resource, Paying More for Less: American Health Care Act, highlights the devastating effects of the AHCA.

We know that the AHCA would yank coverage out from under 23 million Americans, impose an unaffordable “age tax” on older Americans, end Medicaid as we know it, and undermine the Medicare guarantee. Not only that, the bill leaves people with pre-existing conditions out in the cold.

An often-overlooked aspect of the AHCA is the proposed cuts to the Medicaid program. The AHCA caps federal funding for Medicaid through what is known as a per-capita cap. This cap cuts $834 billion in federal funding from Medicaid over 10 years, and will likely lead states to reduce important Medicaid benefits, like long-term home care and nursing home services. This would harm millions of low-income Americans, including the 11 million people with Medicare who also have Medicaid.

On top of Medicaid cuts, the AHCA also spells trouble for people who are just shy of Medicare eligibility. Medicare eligibility begins at age 65 for most. People ages 55-64 often find it hard to stay in the full-time job market or to find new employment after a job loss, making access to health coverage critically important. The AHCA would shift drastically higher costs to people in their 50s and 60s by allowing insurers to charge an “age tax” on health insurance premiums. The Affordable Care Act currently limits the premiums older people pay to three times what younger people pay, but the AHCA lets insurers charge older adults five times (or more if state law allows) what a younger person pays for the same health plan.

To understand the AHCA’s full impact on older adults and people with disabilities, visit Medicare Rights’ new resource, Paying More for Less: American Health Care Act. Share important facts about how the AHCA harms people not yet on Medicare and people with Medicare today and in the future.[x_line style=”border-top-width: 1px;”][x_icon type=”bullhorn” icon_color=”hsl(0, 0%, 100%)” bg_color=”hsl(116, 44%, 46%)” icon_size=”50px” bg_size=”100px” bg_border_radius=”100px”][x_gap size=”20px”][x_custom_headline level=”h3″ looks_like=”h4″ accent=”false” style=”margin-top:0px;”]Speak Up! Tell your Senators to abandon the AHCA once and for all.[/x_custom_headline]Take action and send your Senators a letter. You can use our letter template or adapt the letter with your own message.