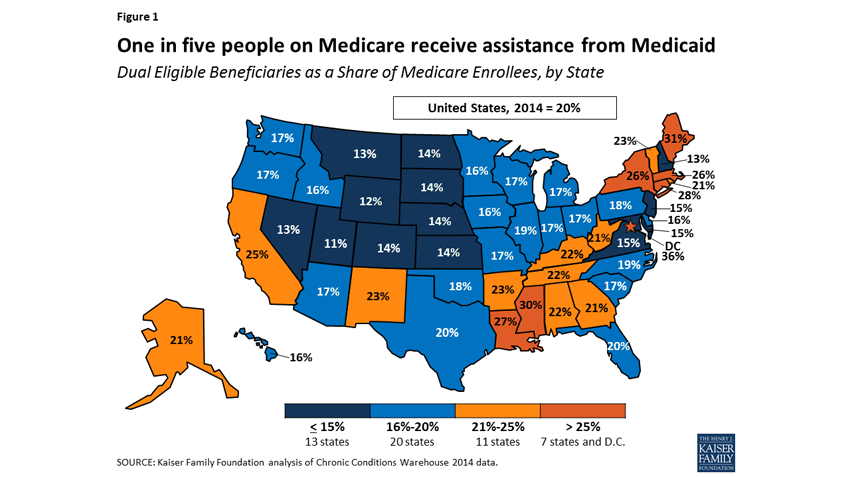 The National Coalition on Health Care (NCHC) recently released an issue brief exploring how recent proposals to change Medicaid financing would affect Medicare. Eleven million people with Medicare—nearly 20%—also rely on Medicaid. Changes to one program can cause a ripple effect to the other. NCHC explains the significant pressure proposed Medicaid per-capita caps would place on Medicare, including the implications for future reform efforts.

The NCHC brief details some significant differences between the average Medicare beneficiary and those who are dually eligible for both Medicare and Medicaid. Dually eligible beneficiaries are older, poorer, and less likely to be in good health than those who only have Medicare. They are also more likely to have impairments that require another person’s help with daily activities of living, such as dressing or bathing.

Dually eligible beneficiaries can receive two kinds of help from Medicaid: 1. help paying for Medicare services, or 2. Medicaid services that Medicare does not offer. For example, while Medicare covers limited nursing home care, that care—one of the program’s biggest expenditures—is also a guaranteed benefit of the Medicaid program. Medicaid kicks in when Medicare’s coverage is exhausted or otherwise not available.

Importantly, Medicaid also helps millions of people pay for home and community-based services (HCBS), those that allow people who would otherwise be in nursing facilities to remain at home. Unlike the mandatory nursing home coverage, HCBS is an optional benefit states are permitted to offer. Many states have made great strides in what is called “rebalancing,” an attempt to shift people away from nursing facilities and into home or community placement.

According to the NCHC brief, a per-capita cap in Medicaid could end these rebalancing efforts, forcing more dually eligible beneficiaries into nursing facilities. Per-capita caps could also cripple efforts to integrate the care and services provided by both Medicare and Medicaid. Lack of coordination between the programs leads to increased spending and poorer outcomes for the dually eligible, and states have worked with the federal government to better integrate the programs.

Combined, these issues would increase budget pressure in the state and lead to worse outcomes as people lack the care and community-based services they want and need. This would combine with innovation-stifling effects to increase cost pressures on both Medicaid and Medicare going forward.