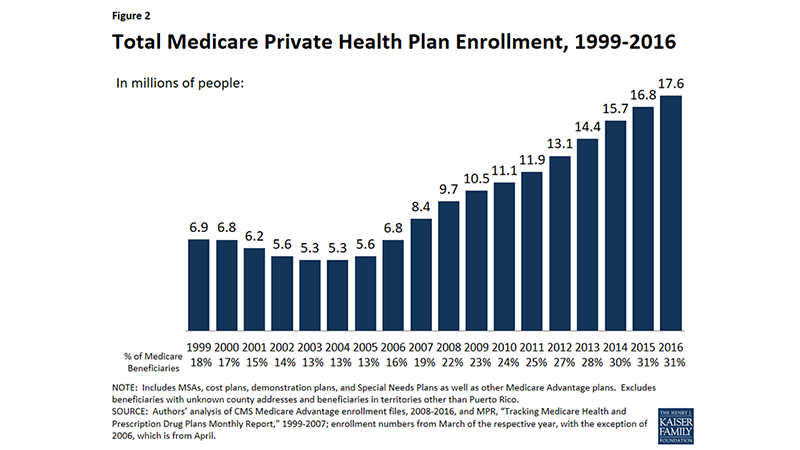 The Kaiser Family Foundation recently released an update on the Medicare Advantage (MA) plan market in 2016. According to the report, enrollment in MA plans continues to increase despite concerns that adjustments in payments to MA plans enacted by the Affordable Care Act (ACA) would stifle enrollment. These payment adjustments were put in place to reduce overpayments to MA plans and align costs with Traditional Medicare. As of 2016, payment reductions are fully implemented in 78 percent of counties, which accounts for 70 percent of people with Medicare and 68 percent of people with MA plans.

Since the ACA passed in 2010, MA enrollment has increased by 6.5 million–a 58 percent increase. According to KFF, MA enrollment increased in almost every state over the past year, and this year, there are 17.6 million people enrolled in MA plans, which is about 31 percent of the Medicare population.

KFF also highlights the large market-share of the country’s biggest health plan. MA enrollment remains “highly concentrated” among the top plans. UnitedHealthcare and Humana have a combined 39 percent share of all MA enrollees, and according to KFF, ” …if Aetna acquired Humana with no divestitures in 2016, the combined firm would account for 25 percent of Medicare Advantage enrollees nationwide.”