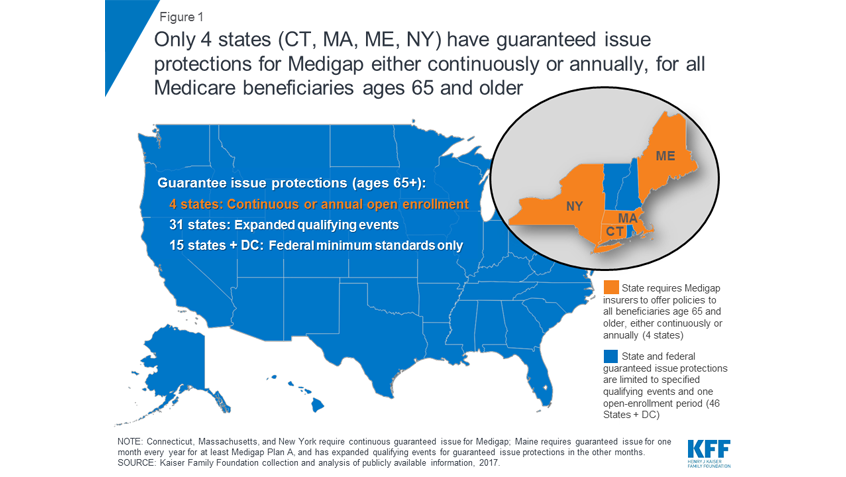 This week, the Kaiser Family Foundation (KFF) released an issue brief analyzing the availability of, and enrollment in Medigaps across different states. One in four people in traditional Medicare had this private, supplemental health insurance in 2015. Medigaps help cover Medicare deductibles and cost-sharing, reduce the out-of-pocket burden associated with accessing care, and protect against high costs because of catastrophic illness or injury.

The issue brief provides an overview of Medigap enrollment and analyzes consumer protections under federal and state law that can affect beneficiaries’ access to Medigaps. In particular, the brief examines implications for older adults with pre-existing medical conditions who may be unable to purchase a Medigap policy or change their supplemental coverage after their initial open enrollment period.

KFF finds that the share of beneficiaries with a Medigap policy varies widely by state—from 3% in Hawaii to 51% in Kansas. Because federal law provides limited consumer protections—largely, a one-time, six-month open enrollment period that begins when a person is first over 65 and enrolled in Medicare Part B—state variances can have significant impact.

States have the flexibility to institute consumer protections for Medigaps that go beyond the minimum federal standards. For example, 28 states require Medigap insurers to issue policies to eligible Medicare beneficiaries whose employer changed their retiree health coverage benefits. Only four states (Connecticut, Massachusetts, Maine, and New York) require either continuous or annual guaranteed issue protections for Medigaps for all beneficiaries in traditional Medicare ages 65 and older, regardless of medical history. Guaranteed issue protections prohibit insurers from denying a Medigap policy to eligible applicants, including people with pre-existing conditions, but they may institute waiting periods in some instances. In all other states and the District of Columbia, people who switch from a Medicare Advantage plan to traditional Medicare may be denied a Medigap policy due to a pre-existing condition, with few exceptions.

The issue brief also discusses potential strategies policymakers should consider to broaden access to Medigaps, including requiring annual Medigap open enrollment periods or making voluntary disenrollment from a Medicare Advantage plan a qualifying event with guaranteed issue rights for a Medigap policy. The brief adds  that though these expanded guaranteed issue protections would increase beneficiaries’ access to Medigaps—especially for people with pre-existing medical conditions—and would treat Medigaps similarly to Medicare Advantage, it could result in some beneficiaries waiting until they have a serious health problem before purchasing Medigap coverage, which would likely increase premiums.

PrevPrevious PostAs Federal Deficits Increase, so Do Threats to Medicare
Next PostMedicare: Strong and Built to LastNext