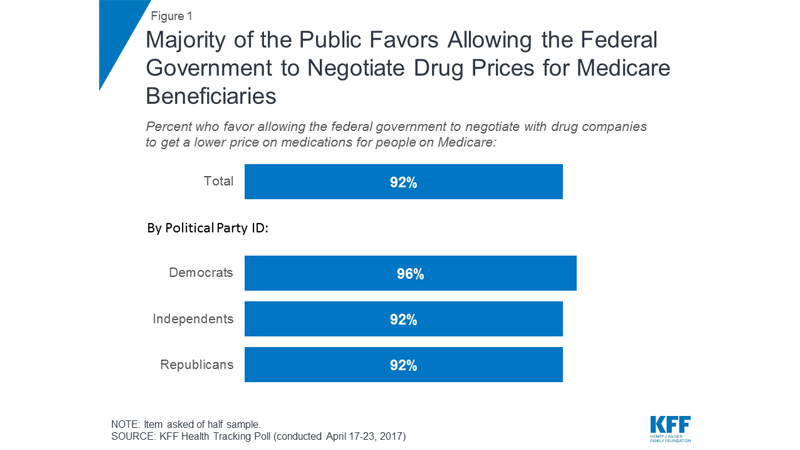 Under current law, Medicare is expressly prohibited from negotiating directly with drug manufacturers to set prescription drug costs for beneficiaries. Instead, each Part D plan must separately negotiate with each drug manufacturer. The belief supporting this scheme was that each plan, though the creation of distinct formulary structures, would have the ability to drive down prices for preferred medications. Then, beneficiaries could choose the plan that had the lowest cost for the drugs that they take.

For many drugs, however, this arrangement means that the negotiating power of the Medicare population is diluted, split across different Part D plans that are in competition with each other and have no incentive to work together to lower prices across the board. The idea of allowing Medicare to negotiate at least some drug prices for all beneficiaries has been promoted as an alternative since the inception of Part D, and enjoys widespread support across the political spectrum.

The Kaiser Family Foundation released a new report looking at the history of this concept, including the dramatically different role that the federal government has in securing good prices for Medicare beneficiaries, compared to its active involvement in establishing drug prices for other government health programs, including Medicaid and the Department of Veterans Affairs (VA). The report outlines various bills that have been introduced in Congress since the enactment of the Part D benefit, and discusses how enthusiasm for making this change tracks closely with the rate of increase in Part D drug costs.

The report notes that with prescription drug spending growth on the rise, and strong public support for policymakers to take action to ensure the affordability of medications, interest in giving Medicare negotiating power has spiked in the past couple of years, and is increasingly a focus of this Congress and Administration.

As soon as next week, President Trump is expected to lay out new administrative actions on the issue. Medicare Rights will be monitoring these developments closely, for any implications the policy proposals may have for people with Medicare to limit the growth in drug prices that has moved too many medications out of the reach of average beneficiaries.