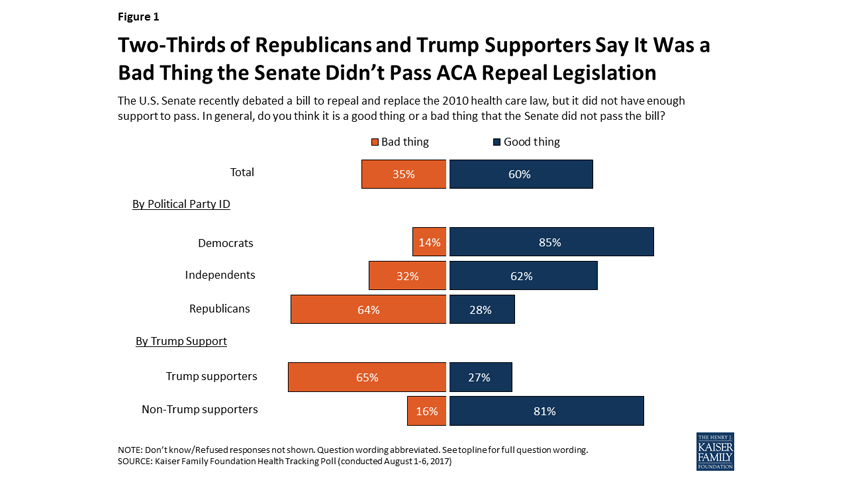 In the aftermath of the Senate’s failure to pass major health care legislation and repeal the Affordable Care Act (ACA), the Kaiser Family Foundation released findings from a poll to understand what Americans think of the ACA, the attempts to repeal it so far, and next steps.

The Kaiser Health Tracking Poll shows that a majority of the public considered it a “good thing” that the Senate failed to pass a bill to repeal and replace the ACA. For those who felt the failure to pass the bill was a good thing, a majority felt that way because they support the ACA. A significant number felt that the ACA should be repealed and replaced, but the proposed Senate legislation was not the way to do it.

The poll further shows that where people assign the credit or blame for the failure of the Senate to pass the legislation depends on their attitude toward the attempt. Those who are pleased the legislation failed give most of the credit to the general public who voiced concerns about the bill with slightly less credit to Republicans who voted against it, and a much smaller percentage crediting Democrats in Congress. Those who are disappointed the legislation failed put most of the blame on Democrats in Congress, with slightly less blame to Republicans, and a much smaller percentage blaming President Trump.

A majority (60%) of the public say that President Trump and Congressional Republicans are now responsible for any problems with the ACA going forward, while 30% place that responsibility with President Obama and the Democrats who passed the law. Nearly 80% want President Trump and his administration to do what they can to make the law work, and 57% of those polled want Republicans and Democrats to work together to make improvements to the ACA.