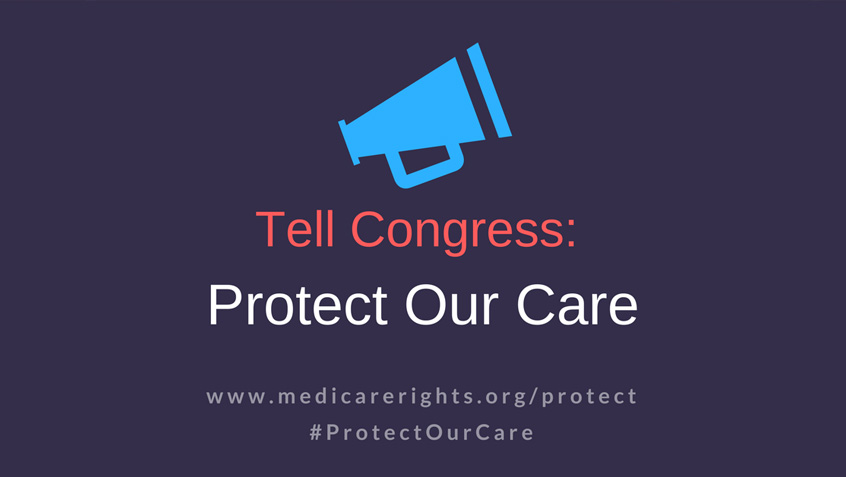 Last month, Congressional Republicans pulled a scheduled vote on a plan to repeal the Affordable Care Act (ACA) that would have ended Medicaid as we know it and would have led 24 million Americans to lose their health care coverage. That bill, the American Health Care Act, also included an unaffordable “age tax” on health insurance for older adults and undermined the Medicare guarantee.

This month, there is renewed vigor to bring the American Health Care Act back to life, with even more destructive changes. Unfortunately, we are hearing that the White House and some members of Congress are working to make a bad bill even worse.

Before the ACA, insurance companies could deny coverage for pre-existing conditions, or charge higher premiums for people who had them. Older, sicker people often could not afford to buy any health coverage. The ACA ended the practice of denying coverage for the millions of Americans with pre-existing conditions. It’s reported that the newest version of the American Health Care Act takes away that valuable protection.

Urge Your Members of Congress to Protect Our Care

We thought this bill was gone, but it seems we are not done yet. Raise your voice today to protect our care. Follow the steps below to keep the pressure on your representatives and tell them to protect our care.[x_custom_headline level=”h3″ looks_like=”h4″ accent=”false” style=”margin-top:0px;”]Step One: Call 866-426-2631 to contact your member of Congress.[/x_custom_headline]You will be asked to enter your five-digit zip code before being transferred to your representative. Urge your representative to:Not to take health care away from 24 million people. The American Health Care Act increases health care costs—most of all for Americans in their 50s and 60s—and puts coverage out of reach for millions.Not to cap Medicaid dollars. The American Health Care Act cuts $880 billion from Medicaid. These caps will force states to ration care, threatening access to long-term home care that allows older adults and people with disabilities to stay in their communities and to nursing home care when it is needed.Not to cut Medicare. The American Health Care Act creates a tax windfall for the wealthiest Americans and pharmaceutical corporations at Medicare’s expense. These tax breaks undermine the Medicare trust fund, which helps pay for hospital care that older adults and people with disabilities need, and will hike Medicare Part B premiums.[x_custom_headline level=”h3″ looks_like=”h4″ accent=”false” style=”margin-top:0px;”]Step Two: Write to your member of Congress.[/x_custom_headline]After you call your member of Congress, send them a letter. You can use our letter, or adapt the letter with your own message.[x_button size=”global” block=”false” circle=”false” icon_only=”false” href=”http://action.medicarerights.org/p/dia/action4/common/public/?action_KEY=21706″ title=”” target=”” info=”none” info_place=”top” info_trigger=”hover” info_content=””]Take action![/x_button]