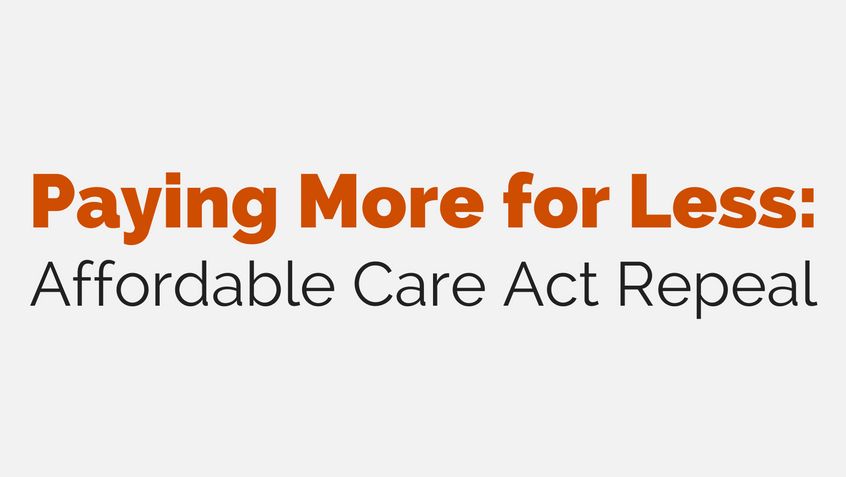 Together with Medicare and Medicaid, the Affordable Care Act (ACA) builds health security for people of all ages. To repeal the ACA and delay a meaningful replacement would force families across the country to pay more for less. Our latest issue brief, “Paying More for Less: Affordable Care Act Repeal,” highlights the harmful consequences of repealing the ACA without an immediate replacement for people with Medicare and for many who are just shy of Medicare eligibility.

Almost 30 million Americans could lose health coverage if the ACA is repealed and a replacement is delayed—this includes nearly 20% of older adults ages 55-64. Medicare eligibility begins at age 65 for most, and people ages 55-64 often find it hard to stay in the full-time job market or to find new employment after a job loss, making access to coverage like the ACA critically important.

Additionally, most proposals to replace ACA coverage would shift drastically higher costs to people in their 50’s and 60’s, such as by allowing insurers to charge them higher premiums. Some of the proposals have no restrictions on how high premiums for older adults can go.

For people who already depend on Medicare, full repeal of the ACA without an immediate replacement plan would have wide-ranging and harmful effects, including:

Some recent plans to repeal the ACA would pass the savings on to the wealthiest Americans in the form of tax cuts. To replace the ACA later, Congress would need to find new savings, and this makes Medicaid and Medicare vulnerable to harmful cuts.

Stay tuned, as we will release further briefs in the coming weeks highlighting the impact of various proposals to change to Medicare, including ending the Medicare guarantee through premium support or vouchers; raising the eligibility age; expanding private contracting between doctors and patients to determine the cost of care; and other potential structural redesigns.

PrevPrevious PostWhat the New Administration Can Do to Keep Medicare Great
Next PostWhat insurances pay primary to Medicare?Next