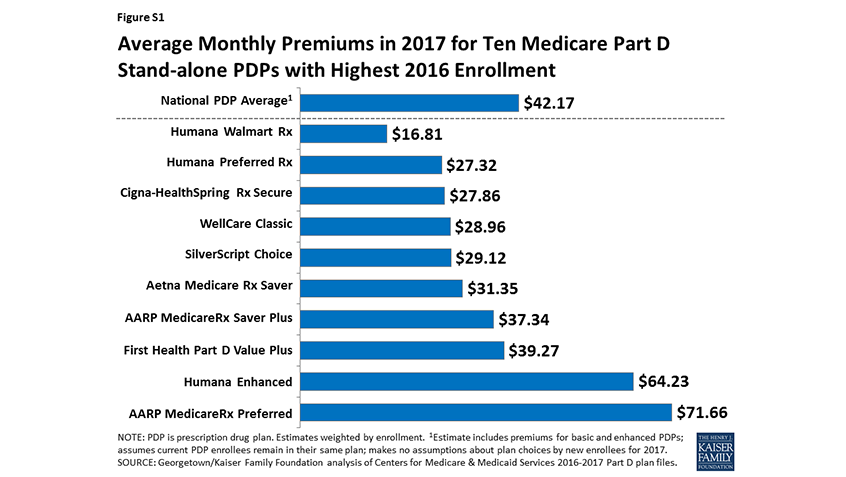 The Kaiser Family Foundation (KFF) recently released an issue brief analyzing the 2017 prescription drug (Part D) plan offerings based on recently released data from the Center for Medicare and Medicaid Services (CMS). The key findings in KFF’s analysis come at an important time as millions of people with Medicare are weighing their plan choices during Fall Open Enrollment, which lasts from October 15 to December 7.

According to the brief, people with Medicare will, on average, have a choice of 22 Part D plans in 2017. The average Part D premium (weighted by 2016 plan enrollment) is projected to increase by 9 percent from 2016, to $42.17 per month–assuming that enrollees stay in their current plan. Additionally, Part D plan premiums will continue to vary widely across plans, with average premiums ranging from $16.81 to $71.66 per month.

KFF also found that, on average, those who received Extra Help, also known as the Low-Income Subsidy, will have seven zero-premium Part D plans to choose from. Assuming those with Extra Help do not switch plans in 2017, or are not reassigned to a new plan by CMS, 1.4 million low-income beneficiaries will begin paying a Part D premium in 2017.

Given KFF’s findings, Medicare Rights advises that everyone with Medicare review their plan choices during Fall Open Enrollment. Plans make changes to their benefit packages every year, so even if you are happy with your current plan, you should review your coverage options.

To research your plan options or for help choosing a plan, call 1-800-MEDICARE or use the Medicare Plan Finder Tool at www.medicare.gov/find-a-plan/questions/home.aspx.

PrevPrevious PostDo I have to sign up for Part D?
Next PostPart B Enrollment Mistakes: One Client’s StoryNext