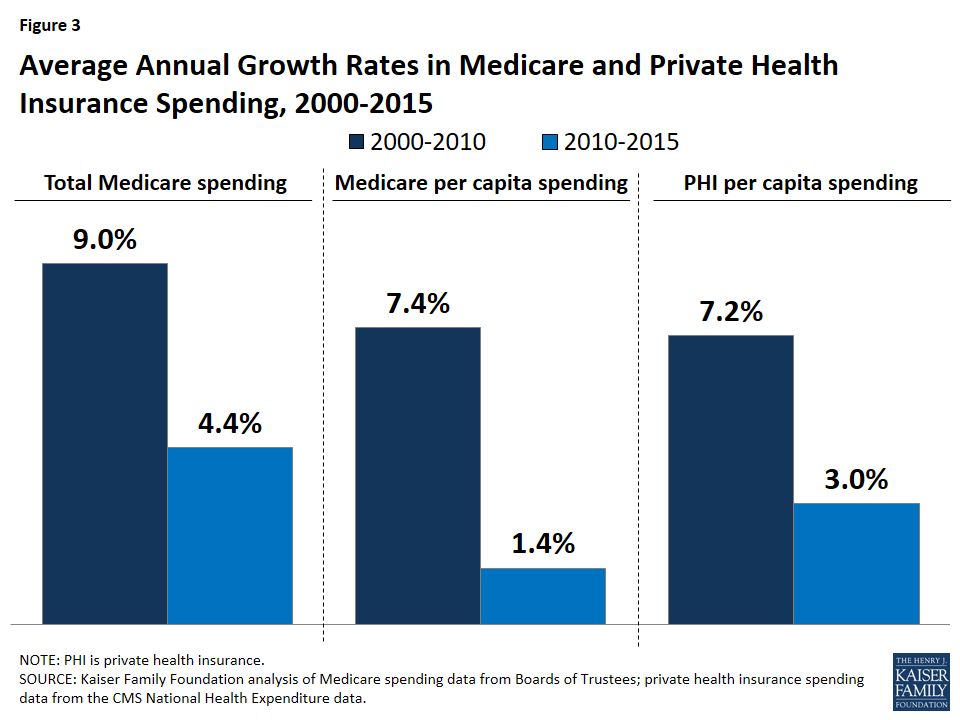 According to a new issue brief by the Kaiser Family Foundation (KFF), the growth in total Medicare spending between 2010 and 2015 (4.4 percent) was notably lower than spending between 2000 and 2010 (9 percent). Even more remarkable, spending in the Medicare program has slowed even as enrollment in Medicare since 2011 has increased with baby boomers becoming eligible. Additionally, the average growth in spending per beneficiary each year was only 1.4 percent between 2010 and 2015, which is considerably lower than average spending growth of 7.4 percent between 2000 and 2010.

While Medicare spending has slowed in recent years, and is expected to slow even more in the future compared to historical levels, KFF points out signs that, “…spending growth could increase at a faster rate than in recent years, in part due to rising prescription drug spending, growing enrollment in Medicare, increases in provider payments, and higher growth in input prices for medical care.” Furthermore, there are signs that total Medicare spending and spending per beneficiary could slightly increase above the historically low levels seen in recent years. For KFF, this raises certain questions, including:

Various policies have been proposed to target potential increases in Medicare spending by restructuring the Medicare benefit and cost sharing. Additional policies have also been proposed to improve Medicare coverage in order to decrease the financial burden of health care costs on people with Medicare. According to KFF, “The prospects for these and other proposals that would affect Medicare spending and financing are unknown, but few would question the importance of carefully deliberating ways to bolster the Medicare program for today’s beneficiaries and for the growing number of people who will depend on Medicare in the future.”

Read the full issue brief on the KFF website.