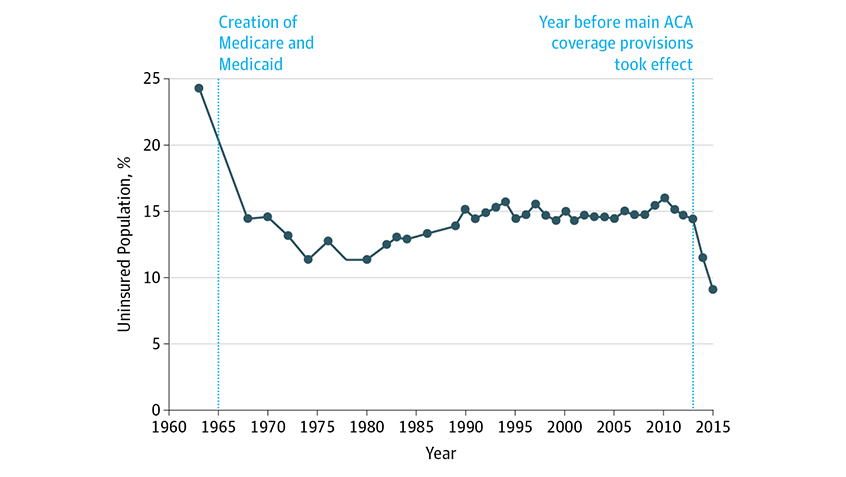 When President Obama took office in January 2009, one out of seven Americans had no health insurance. The Affordable Care Act (ACA) increased the number of insured by improving the accessibility, affordability, and quality of health care. This week, the President published a comprehensive article in the Journal of the American Medical Association (JAMA) outlining the positive results and improvements brought about by the ACA. Despite the innumerable developments brought to health care through the ACA, the President does not dismiss the fact that more is needed to carry forward the law’s promise.

The President remarks that the ACA is the most “important healthcare legislation in the United States” since the passage of Medicare and Medicaid in 1965. Since the ACA became law in 2010, the uninsured rate of Americans dropped sharply from 16 percent in 2009 to 9.1 percent in 2014. Importantly, the ACA also improved coverage for many more who were already insured.

People with Medicare are among those also on the winning ticket regarding the ACA; indeed, the law is now working arduously to phase out the Medicare Part D prescription drug coverage gap (commonly known as the doughnut hole). Since 2010, over 10 million Medicare beneficiaries saved over $20 billion on prescription drugs thanks to the ACA. In addition, the number of Medicare beneficiaries being readmitted to the hospital within 30 days declined remarkably since 2010.

The President ends his detailed and hope-filled article by offering three broader life lessons from the long and oft strenuous process of turning the ACA into law. Firstly, “change is difficult”—hyper partisanship delayed the process of making the ACA into law. Secondly, “special interests pose a continued obstacle to change”; consequently, tackling the special interest dollars in the American health care system is long overdue. Finally, one must not forget the “importance of pragmatism in legislation and implementation”; perseverance is paramount in passing such a revolutionary act.