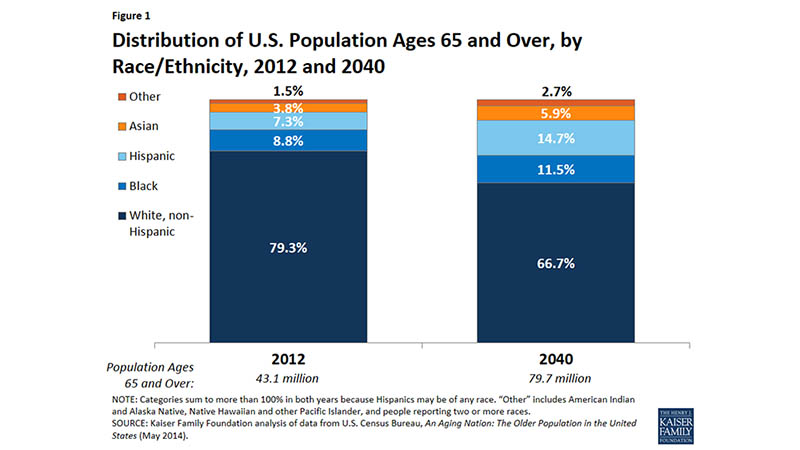 According to a new report by the Kaiser Family Foundation (KFF) highlighting the racial and ethnic backgrounds of people with Medicare, one-fifth of older Americans ages 65 and older are people of color, including 9 percent who identify as black, 7 percent as Hispanic, and 4 percent as Asian.

Medicare plays a vital role in providing health coverage for the nation’s older and disabled populations. According to KFF, “Medicare, in conjunction with the Civil Rights Act of 1964, was transformative in desegregating the nation’s health care system for patients and providers and in improving access to care.”

Medicare has helped even the playing field with regard to health outcomes for diverse communities, but there is still work to do. Overall, life expectancy for people age 65 improved over the past few decades, but it is lower for blacks than whites. Research also demonstrates inequalities in wait times for life-saving treatments, like kidney transplants and cancer treatments, as well as in how often people in certain groups are readmitted to the hospital. For people enrolled in Medicare Advantage plans, black and Hispanic enrollees are less likely to have their blood pressure, cholesterol, and glucose level under control compared to whites.

Yet, many factors, such as housing, income, and education, can influence a person’s quality of health long before they become eligible for Medicare. Disparities in care provided to racial and ethnic groups also result from differences in clinical treatment practices as well as cultural and language barriers, which particularly impact  Hispanic communities.

PrevPrevious PostAsk the Candidates How They Will Protect Medicare
Next PostCOPD Foundation: Questions About ScootersNext