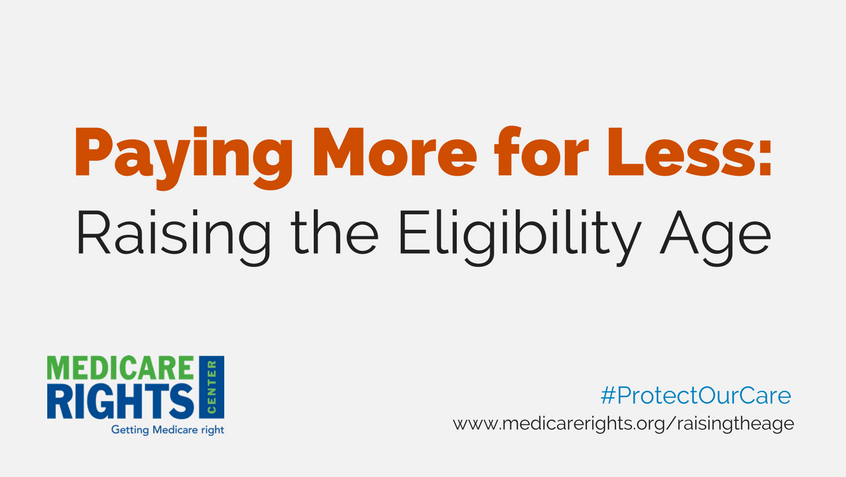 As policymakers continue to debate the future of our country’s health care system, some lawmakers support increasing the Medicare eligibility age from 65 to 67 in order to save money for the federal government. This costly benefit cut is sometimes defended by arguing that as Americans live longer and delay retirement, most people will not need Medicare at age 65. But most Americans retire well before age 67—half of all men are retired by age 64 and half of all women by age 62. Our latest issue brief, “Paying More for Less: Raising the Eligibility Age,” highlights the harmful consequences of increasing the eligibility age for Medicare above 65.

Raising the Medicare age is unpopular with Americans of all ages. More than 60% of Americans ages 18-54 and nearly 70% of those ages 55-64 do not support raising the eligibility age. The unpopularity of this proposal is most likely due to the likelihood that many older adults would pay more or go without affordable coverage.

Increasing the eligibility age could result in premiums going up for all people with Medicare. The absence of younger, healthier 65- and 66-year-olds in Medicare would leave an older, sicker, and more expensive group for the federal government to insure. Additionally, if the Affordable Care Act is repealed, the uninsured rate among Americans ages 65 and 66 could jump from 1.1% to as high as 37% in 2019. Between almost 1.9 million to 3.8 million people ages 65 and 66 could lose health insurance, depending on the continued availability of ACA coverage options.

Working-class people and diverse communities would be especially harmed by this proposal, with diverse communities being among those hardest hit. People of color tend to be in poorer health at earlier ages, with lower incomes and less wealth. Access to Medicare at the earliest possible age is essential—if not life-saving—for diverse elders. Machine operators, farm workers, and others with jobs that require physical activity and manual labor are often unable to delay retirement. They also need Medicare as soon as possible.

Visit this webpage to read the brief and share key facts about raising the Medicare age on social media.

PrevPrevious PostTell Congress: Protect Our Caregivers
Next PostWhat to do if you’re wrongfully billed for Medicare costsNext